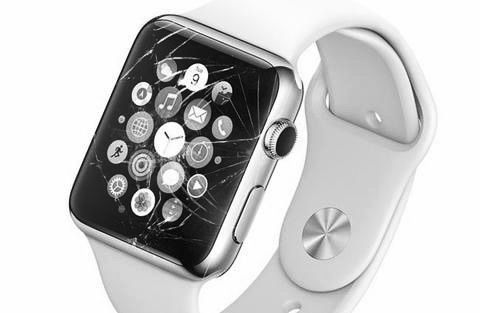 Repairing the glass of an Apple watch is nearly impossible. If you happen to break it like it happened to me without realizing it is also quite frustrating. There are some things that should be known and that become clear only when the accident happens.

Over time, Apple has created an object that also returns the time, in reality it is often purchased for other reasons. From version 4 to today, we are at 6, the focus of development has gone in the direction of health and monitoring of one’s physical fitness. Inside the little square some carry on their wrists is significant processing capacity, many sensors and a battery.

The design of the Apple Watch is affected by a construction philosophy and engineering choices that are the result of careful mediation between the various needs. From a design point of view, space is therefore a very important element. The oled screen and the glass protecting it have been built to provide a large visual area and to be an efficient output device.

The Apple Watch also adds sophisticated payment and in some cases identification functions to the various functions of analysis and tracking of one’s health. Together with an oled screen and protective glass, Apple adds an NFC sensor for these purposes, which makes the possible repair even more complicated.

When your Apple Watch takes a hit, damage can range from simply breaking the protective glass (in some models it is sapphire crystal) to damage to the oled screen below. Understanding the extent of the damage tells you if a repair is possible.

If you search through the Apple website, the cost of repairing damaged glass or a broken oled screen is equivalent or almost equivalent to the cost of buying the Apple Watch new, especially the cheaper models. During construction, the oled screen and protective glass are glued together and the NFC circuitry is added to this. While the assembly process is industrial, any disassembly can only be done by hand with the use of expert hands

Subscribing to Applecare + for an economic model does not facilitate much and is still a nice extra cost, worth about a quarter of the value of the Apple Watch itself. To this in the event of damage, the value of the deductible per accident must be added to be always paid to the Apple value chain. Not a little.

Before the new model 6 I owned the previous version 4 for 2 years, never having protected it in a particular way and having used it daily without any particular problems when purchasing the new model, I did not change strategy.

My use is on the left wrist, I go on a motorcycle, bike, winter ski, gym 2/3 times a week, office and desk life, I wear it when I shower, at the lake when I swim and when I sleep, in fact I only take it off for recharging and when I take a Turkish bath or a sauna in the gym. They are certainly in the range of those who use it continuously and the previous two years without problems have perhaps made me overestimate its robustness.

Returning to the design, the screen and the glass come out of the case and rise rounded towards the outside. This ensures in the 44 mm version a great readability that would not be possible otherwise. At the same time, it shows one of the few weaknesses of the Apple Watch or in any case shows a point where the user can have his say imagining extra protection.

When after only 2 months of owning my new Apple Watch I discovered that the protective glass had broken I was pretty annoyed. I had not signed the Applecare +, the cost of the official repair is extremely high to the point that it is worth buying it new.

If you search the internet on the classic search engine, for example, you will discover something extremely interesting. In addition to the replacement, someone does what he calls regeneration. This consists in replacing the protective glass of the oled screen only and is possible only if the underlying oled screen is intact. Fortunately for me, this was my case.

The operation is obviously not under warranty and is not done by Apple. I found a laboratory that does it and that has organized itself to do it in Messina. Of course, at the beginning you are a little surprised, you would imagine such an activity in the rich Brianza or in the industrious Veneto but for purely historical purposes it is good to remember that until the early 1900s Sicily was the most industrialized region of Italy.

The industrial heritage was reduced to a minimum at the beginning of the Kingdom of Italy by the Piedmontese who systematically forced the displacement of major activities in other areas of the country to begin with the Palermo shipyards, which were removed from the concession in favor of Tuscany where were reopened.

Furthermore, Sicily has been culturally a crossroads for about 3 millennia, Phoenicians, Greeks, Arabs and Spaniards each left their own experiences. Therefore, finding a qualified artisan workshop says a lot about the fact that even in Sicily you can do beautiful things.

In detail, a couple of messages on WhatsApp and a short phone call dispelled my doubts and said done I sent my Apple Watch by courier for regeneration.

The process, it should be clarified, can only take place if the underlying oled screen is intact. In this they help you from the laboratory asking you to take a couple of photos and then send them via the internet. Diagnosed as repairable you can ship.

The regeneration takes place by detaching the NFC block / screen / glass from the metal case, subsequent disassembly of the individual parts between them and replacement of the damaged glass screen.

The process makes use of precision equipment, such as a cutter to facilitate detachment with a blade of only 0.2 mm, a lot of experience gained over time and certainly also some failures without which no one learns. You therefore pay for this set of things, the uniqueness of the procedure, the equipment not available to everyone and the experience.

Cost aside from that I invite you to check for yourself and that made me lean towards regeneration instead of extreme waste and the repurchase of the new one, I am very happy that the laboratory exists and exists in Messina.

In a few hours I’ll get my repaired Apple Watch back and give you a trace. As of now, thanks to those who assisted me in this little misadventure and to an artisan reality https://www.riparaora.it/ which, even if in shirt sleeves, while it was snowing in the north (I admit it is envy), it has not delocalized itself but rather shines with its own light in a complicated, complex region, rich in unique human experiences and heritage of the whole country and part of a Europe that must renew itself while keeping its best to itself.

I close with a personal examination of Apple and the economics of this product. The cost itself for the functions it performs is not stratospheric but it is high. Apple as well as producing quality items also wants to earn and this does not seem to me a crime as some unfortunately claim. Of course in the event of an accidental fall or a blow on the glass … (I still have to understand how and where I broke it) it is a great nuisance …

Let’s do the math together … the latest version, the more sophisticated one, is on sale for around 450 euros in the 44 mm version with an aluminum case. It has all sensors and performs the most complex functions. The Applecare + at the time of writing costs about 100 euros, allows 2 accidents every 12 months and lasts 2 years, the deductible costs 65 per accident. In light of these numbers, perhaps with a fairly active life like mine I would have done well to take out insurance. Fortunately, I found someone who invented an artisan work and came to meet me. Good job riparaora.it and thanks. Andrew